Boone, IA. (December 28, 2020) – Harris Auto Racing announced today that they have created a partnership with up-and-coming dirt modified racer Cody Thompson for the upcoming race season. Cody will make the move to an IMCA modified and will campaign for the IMCA National Rookie of the Year in 2021.

“I’m really excited for the opportunity to work with Kyle and the entire Harris Auto Racing team.” said Thompson “I feel at home with these guys, the majority of my Sportmod success came in our Harris car and to have an opportunity to win modified races back in a Harris car is pretty cool.”

Regularly known for his domination in the IMCA Sportmod and USRA B-Mod ranks, Cody has 108 wins and 5 championships in his 4 years in the division including the IMCA Super Nationals Qualifier, IMCA Duel in the Desert, IMCA Harris Clash, IMCA Night of 1,000 & 10,000 Stars, 2x Speedy Bill Smith and Charlie Clark Memorial, Fever Heat 100, and the Hogan Memorial.

“Harris Auto Racing has a great reputation of quality cars and service for many years, the amount of experience just within the organization shows the caliber of team we are working with, there is a long list of people to thank for continued support and I appreciate each one of them.” remarked Thompson.

Thompson has tested the new 2021 Harris Modified with positive results and has shown the transition should be a quick one. Thompson will join Harris Auto Racing owner Kyle Brown in communicating with the rest of the Team Harris members on chassis and suspension development “Harris Auto Racing has been working very hard on research and development of the 2021 Modified and it has shown some serious speed, a guy like Cody is only going to accelerate that process.” said Brown. “Cody has shown to be a great team player and has taken to the feel of the Modified division faster than expected. He has already shown speed in testing and I am confident he will do a great job.”

Thompson will begin his 2021 Modified rookie campaign in Arizona, beginning at the Cocopah Speedway January 6-16 and heading to the Arizona Dirt Track Tour Feb 6-15 before returning to the Midwest for the summer race season.

Boone, IA (September 3, 2018) – Harris Auto Racing is pleased to announce the return of Mark Elliott to our staff, he will serve as the Technical Sales Associate for Harris Auto Racing. Elliott will be responsible for sales, technical support, and will assist with chassis development.  “With the addition of an industry veteran like Mark, Harris Auto Racing is excited to continue broadening our reach while serving the needs of our customers through top level personnel, his experience will be beneficial to not only us as a company but our customers as well.” Stated Kyle Brown, President of Harris Auto Racing. Elliott has a decorated resume within the circle track market and is the founder of Terminator Chassis. Harris purchased Terminator in fall of 2005 and has continued the brand under the same roof as their industry leading modified chassis. Elliott served as the Sales Manager at Harris from 2005 to 2011. “The decision to move on 7 years ago was a tough one, however the things I have learned during those years will be beneficial to our new venture together.” Stated Elliott. “I’m very excited to return to Harris Auto Racing, it’s a coming home of sorts.” Effective September 17, 2018 customers will be able to contact Mark at the shop 515.432.6972 ext11 or via email mark@harrisautoracing.com. If you are looking for more information regarding Harris Auto Racing and their products visit the website  www.harrisautoracing.com.

We are still here!! We are however experiencing an Internet and phone outage, our provider explained how a fiber cable was hit by some construction work and most of Iowa with their service is experiencing this outage.

We are sorry for the inconvenience this may cause you by not being able to contact us via phone. But please feel free to message us or email maggie@harrisautoracing.com as I will have it open on my phone.

They were unable to give us an ETA but said since it is a state wide problem they have tons of people working on the issue.

Again sorry for the inconvenience and we will keep you posted, please SHARE.

Boone, IA (November 28, 2017) – After review of the 2018 IMCA rule amendments and discussion with the sanctioning body, we must address the Modified body dimension V as well as Northern Sportmod body dimension U (roof min/max dimension). We have fielded many questions in the past week regarding the release of the new rules. “In the past 32 years we have built many different roof designs for our Modified chassis all of which meet the requirements set forth by the respective sanctioning bodies at the time of manufacture. Unfortunately, we do not receive any forewarning on such rule changes and must react just as our customers do.” commented Kyle Brown, President. Many roofs manufactured prior to this release are slightly short of the new letter V roof minimum dimension.

We are currently working on updating patterns and rebuilding inventory. If you find that your current roof is not to the new minimum specification, we have been informed that it will be enforced accordingly. Anyone in need of the resized roof please contact the shop to get the roof and sail panels ordered to meet the new specifications. Harris Auto Racing has been the leading manufacturer in quality and innovation and will continue to set the standards for the industry. “Legality of our products has always been a priority for Harris Auto Racing and we will continue to build our racecars within the rules provided by the sanctioning bodies.” continued Brown.

If you would like more information or need any clarification on the 2018 rule changes, please contact the IMCA Executive Director of Competition Dave Brenn at 785-307-8482. If he does not answer, leave him a voicemail as he is a busy individual this time of year.

We will be closed Thursday, November 23rd, 2017 so our employees can enjoy their Thanksgiving with family and friends.  Our normal business hours will resume Friday, November 24th, 2017 at 8am. 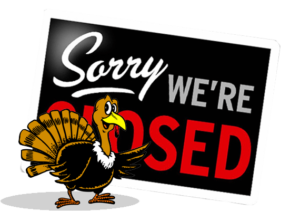 They are working on fixing them and once they are fixed we will be much clearer than before!